Showing posts from December, 2017
Show All

December 25, 2017
Matthew 17:20 Every child of God has faith. We (children of God) have faith to various degrees and levels but we all have faith. Matthew 17:20 The faith you have is enough. Faith is so powerful that a small amount of it is enough to walk in power and exploits. When Christians pray or try to use their faith and nothing seems to happen, most times we assume or say the individuals do not have faith. Like the disciples of Jesus we begin to wonder what's wrong. Matthew 17:19 This is not correct. Every true Christian has faith. To perform exploits and walk in power you have to use your faith. Exploits do not answer to faithlessness. Your little faith is enough to perform exploits. Your little faith (mustard seed faith) can move mountains. It is not so much the size of your faith that creates an effect but using your faith. Your faith has to be activated. Your faith can also grow. Jude 20 The spirit realm moves and responds to faith. Matthew 9:29 Your faith will
Post a comment
Read more

THE STAR OF A KING!

December 21, 2017
Matthew 2:1,2 The star that was seen in the sky by the wise men in this Bible passage was no ordinary star. The way it shined by day and by night was unusual. This star was a moving star, it wasn't stagnant or fixed like all the other stars of the sky. I believe this is why we put stars at the top of the Christmas trees. This star was unusual because it is a star of an usual man. It is the star of a king. It is a star of a man born king of the Jews and king of the angels. It is the star of a man who came to earth to save and deliver you and I by His own death and with His own blood. The death of Jesus Christ happened on a cross or a tree. Tress have a very positive representation/symbolism in the Bible. I believe this is where the concept of the Christmas tree comes from. Exodus 15:25 - a tree brought sweetness to a bitter situation. Isaiah 61:3, Isaiah 60:21, John 15:1-5 -we are called the planting of the Lord, trees are plants. God's people are referred to
Post a comment
Read more

December 18, 2017
There are similarities between the happenings in the book of Esther and spiritual truths. In the book of Esther we are shown how earthly kingdoms operate. We see what things were like during the reign of king Ahasuerus (Xerxes) who married the Jewish orphan -Esther. Ahasuerus was the sole ruler of the Persian empire and grandson  of Cyrus the great. Jesus is the ruler and Lord of the heavenly kingdom and the Son of the Father. Ahasuerus was powerful and influential. Jesus Christ is powerful and influential. Esther 1:1-8, Isaiah 9:7 Ahasuerus had a wife who lost her crown and position, Jesus had a disciple who lost his place and destiny in Jesus's ministry. Esther 1:19,20 Acts 1:16-20 The Persian empire had princes of the kingdom who accessed the king. Esther 1:14 The kingdom of God has sons/daughters (princes & princesses) of God  who can access the King because of the finished works of Christ. Hebrews 4:16 John 1:12 The Persian empire's princes had ranks.
Post a comment
Read more

December 14, 2017
It's that time of the year again when we get excited the year is ending and we will soon step into a fresh and brand new year. It's that time of the year when we remember and celebrate the birth of the king of kings and Lord of Lords. Isaiah 7:14 It is the festive season. In the midst of all the happiness, lights, color, celebration and excitement it is easy to forget what is important as Christians - our prayer life. 1 Thessalonians 5:16 We should be happy and we should be excited. There is nothing wrong with celebrating Christmas as long as we don't neglect our prayer life. Romans 12:12 There's nothing wrong with the culture of Christmas which involves the giving of gifts, and showing of love, as long as we do not forget to spend time in prayer with the one Christmas is about - the Lord Jesus Christ. The place of prayer is one of the ways we spend time with Jesus the messiah. So as we go about this festive season in it's usual busy and jolly tradition
Post a comment
Read more

December 10, 2017
Numbers 18:21 1 Samuel 2:20 Isaiah 43:4 Matthew 13:46 God can be spoken to. Let's not take it for granted. It is a miracle! That the God of heaven and earth, the Father of all spirits listens to us, came down to us (as Jesus) and loves us is a miracle! Since we can talk to Him we can negotiate with Him. Isaiah 1:18 Because God communicates, we can do business with and for God. In fact we should be about the Father's business as Jesus showed us by example when He was here in human form. Luke 2:49 As we make exchanges in the natural realm we also make exchanges in the spirit realm. Exchange is the essence of business. We exchange our money for the goods and services we need. In the spirit realm our faith is the currency we use for exchange. Matthew 9:29 With faith you transact in the spirit realm. As you release your money in this physical dimension to get the goods and services you need, in the spirit dimension you use your faith in God to get everything God
Post a comment
Read more 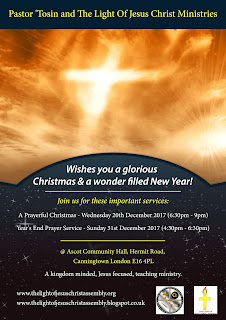 Here in The Light Of Jesus Christ Assembly Ministries, we wish you a glorious Christmas and a wonder filled New Year - 2018! God bless you and see you in one of our services soon. Venue: Ascot Community Hall, Canningtown, London E16 4PL Jesus Christ is Lord!
Post a comment
Read more
More posts